Video above: “The First Friend” is a glance into first two friends who gave birth to the “Match A Friend” concept. Adam (who is on severe spectrum of autism) and Cole his friend/caregiver. 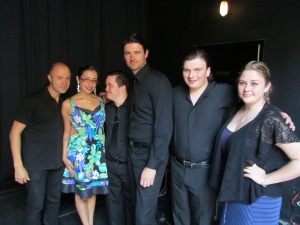 “Match A Friend” provides a new, fresh and unique perspective working with both autistic and non-autistic youth, helping to establish connections based on mutual interests and empowering them through social media tools such as performing arts.

Through this program youth are match as “friends” based on their personality, interests and the ability to creatively perform tasks.Utilizing the “Match A Friend” integration module, our goal is to provide a strong, unique education leading to a life-long career based on the interests of the individual.

The foundation of this friendship is based upon several important pillars including education and training about autism and social differences, and understanding of connection through the medium of the performing arts and dance. Having a friend is a powerful vehicle all youth, especially at a younger age to overcome social barriers, lead a fulfilling and productive life becoming an asset to the community.

Many individuals with autism as well as youth without autism have great potentials, which are ‘locked’ and they have to struggle immensely to express them. Our programs are geared to helping them to overcome this barrier.

The preparation of ‘friends’ for each autistic participant involves training with a team of professionals who are part of Autism Unites (former Dance Into Unity, Inc.) network. The aim is to elevate the quality of life of both parties – providing a healthy and meaningful connection to an individual with autism, whilst building a sense of purpose, confidence and consciousness in their ‘friend’ – a team oriented structure, which could significantly benefit the growing generations of our society.

While being aware of the needs and characteristics of youth affected with autism spectrum disorder, and providing the necessary components to meet the demands of this population, our focus is not on treating any illness but rather creating an environment where we can all go from a deep state of disconnection to a deep and perhaps most true connection.

In 2010, we first hand witnessed miracle of such connection between a teen with a case of severe autism and his peer, which gave us the idea of “Match A Friend” (see story below). In 2011 – 2012 we worked with a group of 8 young adults (4 with special needs, 3 of them with autism), a project which was filmed by Joey Travolta’s Inclusion Films in the documentary “Through the Heart of Tango” (see trailer). In 2012-2013 we again paired together a group of young adults with and without autism in a series of workshops called “Beautiful” and again the experience was beyond expectations.

We have witnessed a miracle from both sides of the friendship, i.e., the autistic youth experienced an array of positive emotions with increased energy, attention span and alertness, while the peers who contributed their time achieved an extraordinary sense of purpose and fulfillment.

We feel that this project is essential in response to the growing epidemic of autism.

In September 2010, an accident gave birth to the “Match A Friend” concept. The is the story of  ‘The First Friend’ – the connection that inspired “Match A Friend”. (See video at the top of this page)

Autism Unites has been actively involved in the cause of autism since 2006, but in September 2010 we got in way further.A couple of years prior to this, we became involved in the life of Adam, a 17 year-old teen with a severe case of autism complicated by seizures.

In September 2010 Adam had an accident – in the midst of one of these seizures where he fell down and broke his front teeth. The family was devastated and Autism Unites responded by organizing a 24/7 care team to help.

This turned out to be a most valuable experience for everyone!In addition to basic round-the clock care, we found a friend for Adam. The friend was a 22 year-old Special Ed student whose name was Cole, just a couple of years older than Adam. It turned out that this connection created miracle not only for Adam, but also for Cole. Adam, who was extremely withdrawn most of the time started to not only crave connection but demand it, and Cole grew as an individual to discover his strength and a real sense of identity.

Cole spent 7 months with Adam and when he left it was very difficult for us to find a replacement. This turned out to be the end of one chapter and the beginning of a new one, the chapter called “Match A Friend”.